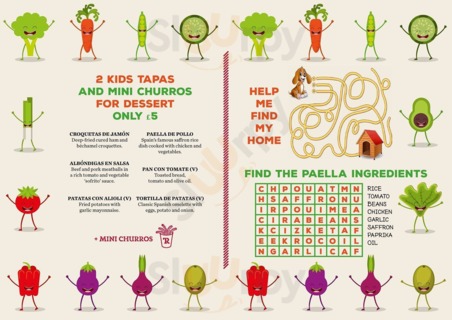 Find the best restaurant in Birmingham

Joelma
+4
My partner and I discovered this place and we love it. The sangria pitch is a must ! The food is quite decent, the portions might need an update but apart from that it’s a lovely place Love the fact that every waitress speaks Spanish.
May 24, 2019

Ticker Eats The World
+4
Grand Central is slowly becoming my favourite place in the city to have a good meal. With so many options, many of which are new-ish to Birmingham (at least the central parts), I’m spoilt for choice whenever out and about in the area. Tapas Revolution was on my radar for a while. The day I finally decided to eat there, it was packed with the lunch hour crowd. So, I waited a good 45 minutes before approaching the place where I was escorted to the “bar” area for a seat. The menu at Tapas Revolution is filled with Spanish classics with quite a few specialities that makes eating here for the experimental foodie a joyful experience. My meal consisted of the following: Arroz N. - Flavourful squid inked black rice with prawns and squid. Lovely distinct taste and definitely one of the specialities here.Tortilla de Patatas - My least favourite, but still worth a bite. The classic Spanish omelette with potatoes and onions, could have been for me slightly softer.Aceitunas Manzanilla - Good old Andalusian green olives that go well with whatever you’re drinking.Pan de la Casa - Beautiful taste to what seemingly sounds simple. Pazo de Mariñan Godello Treixadura Albariño - A lovely white that’s perfect with the black rice as recommended in the menu. It’s not the cheapest meal you’ll have at a “train station” but when you consider the ingredients, the freshly prepared food, and overall pleasant aura of the place, I feel Tapas Revolution is definitely a wonderful Spanish culinary experience.
Dec 25, 2018

Valentina C.
+4
Finally, I made my stop at Tapas Revolution in the Grand Central station in Birmingham! The location is cool and colourful, on the second floor of the station and people can choose where to sit (bar or table).The space is quite small but everything is well curated. Note that it's quite cold because it's an open space and that - if you aren't familiar with the concept of "Tapas", tapas are finger food (small dishes thought to be shared with friends). Tapas are thus quite small in portions but I've found the two dishes, Torreznos con Mojo Dulce and the Pisto, really rich in flavour, original (traditional) and not oily. Piso is a sort of ratatouille without potatoes (thanks god): vegetables such as aubergine courgettes and peppers slow cooked in tomato sauce. The was recommended by Alfonso who also made me some company and had a nice chat with. (Nice to hear Spanish again) He's really friendly and told me a lot about Spanish cuisine and his way of cooking. Torreznos con Mojo Dulce are pork bite fried and flavoured with a particular glaze which spicy and slightly sweet. I knew already that taste, Spanish pimiento is spicy, dry and with a particular bitter twist unlikely chilli peppers. Despite this dish was fried, every single piece was crunchy and fragrant that is perfection in this case. Everything well presented. They were both fulfilling. I was craving to try churros and got some, the plate was filled with: such a surprise! Churros are fried dough accompanied with hot chocolate. Here too, the churros were perfectly cooked, fragrant and not oily. Unfortunately, the added sugar and cinnamon (despite nice and close to the Brit taste), deviate from the traditional concept, but all in all, they were delicious. I've got 3 tapas for around 11£ with a student discount. I would say too much, but all was well cooked and really fulfilling. It's weird to eat at the bar and seeing the staff around but I enjoyed the chat and the meal. Unfortunately, it's still too cold but the Tapas Revolution corner is better (in term of temperature) than Pho which is too exposed. Next time, no cinnamon and sugar on churros, please!

Brian C.
+5
I couldn't be happier with my visit earlier today. Going out for lunch on your own on Valentines Day is always a somber affair - but only because I'd been dragged up to Brum for work and the missus was back in London. I've been before and sat at the bar, which was fine but I much preferred a table as I had today. I ordered from the lunch menu which is cracking value for 9.95. You get some bread and garlic aloili, and the choice of two of several tapas. I went for the chicken paella and then the meatballs. Both were generous portions, and equally delicious. I'm not a fan of seafood and I have a really hard time tasting saffron (it's almost completely lost on my palate) but I really enjoy the paella from TR and have had it before. Never had the meatballs before but they were really good. Also - a decently speedy lunch if you're catching a train!

Our aggregate rating, “Sluurpometro”, is 88 based on 3587 parameters and reviews